Rick and the Pop-Tart

I haven't been home long from my annual fall trip to Charlottesville, though this year, with no football game or to-do requiring “festive dress” on my dance card, I left my orange trousers at home.  The excuse for my trip was the annual A-School dinner—but more about that in a later post.

When I got to Charlottesville on Friday evening I went to the Downtown Mall to get a bite to eat. Since it’s a foodie kind of town, there are tons of options that don’t exist in Happy Valley, the land of the chain restaurant. I bypassed the place that sold Himalayan bar-b-que, the spot for specialties of the Tierra del Fuego, and even the Seychelles style deli, and instead opted for the consciously non-foodie American diner sort of place. I had the meatloaf, and wow, that was one big platter of meatloaf. It was a serving fit for Fred Flintstone. 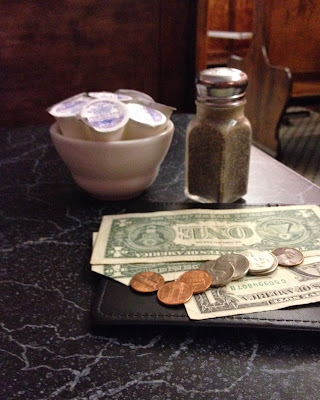 The waitress, who sported a pierced eyebrow, joked with me that she had difficulty making change for a twenty even thought she was a UVa student studying to be a math teacher. We discussed division “strategies”, something I'd never ever heard of until a short time ago when a middle schooler tried to teach me math. (Best strategy: use a calculator.) I then sent off to explore the shoppes, listen to street performers, and check out the excellent examples of the whatnot that makes the downtown mall a fun place to be.

After about 20 minutes of walking about it became apparent that meatloaf had not been a good choice. Actually, it wasn’t just not a good choice; it was an egregiously bad choice. I made a bee line for my hotel where I enjoyed some quality time wishing that I'd gone with the crab cake sandwich and wondering how long you can sit on the toilet before you get that indentation from the seat around your ass.

As far as evenings in Charlottesville go, it wasn’t one the Convention and Visitors’ Bureau would be proud of.  I don't know about you, but I'd sooner stay home than go to a place whose CVB's slogan is "You can catch up on your New Yorkers while sitting on the can!"

When I awoke the next day I was mighty hungry since my dinner and the rest of the food I’d eaten that week made their exit significantly earlier than planned. Rather than a reheated pastry at the hotel, I opted for street food at the Charlottesville City Market. It’s foodie heaven for victuals free-range, heritage, heirloom, and gently slaughtered. 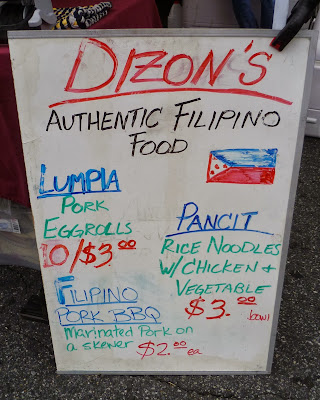 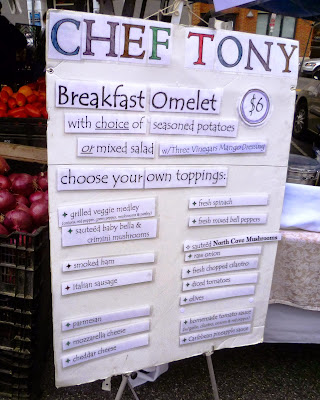 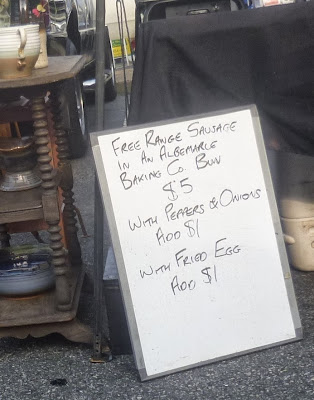 After looking at freshly made tacos (yum), Philippine stuff (too foodie), omelets (not really street food), and meat pies (weirdly British) I opted for a hot sausage sandwich. I know, just the thing on an empty digestive tract. Except it was free-range, woods-raised, distant cousin of Arnold Ziffel sausage.

Before I could place my order, I had to wait in line behind a somewhat clueless hipster couple. They were looking over the menu board of pork products that they could purchase to cook at home.

“What’s the difference between regular bacon and jowl bacon?” they asked the vendor, a sturdy and unshaved (but not fashionably unshaved) fellow, not given to flights of oratory.

“Jowl bacon is made from jowls.”

The hipsters looked at each other and scratched their heads, perhaps discovering new locations for tattoos in the process.

Not surprisingly, they passed on the jowl bacon. 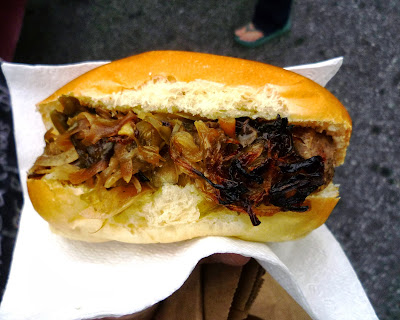 My non-jowl sausage on an Albemarle Baking Co. bun sandwich was mighty tasty. With a dent made in my hunger, I decided to check out the other stands. 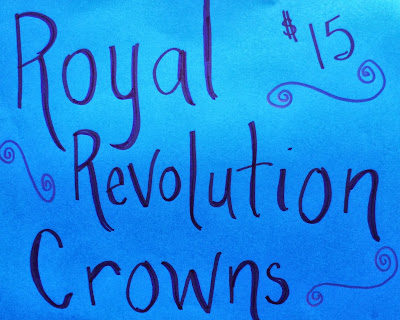 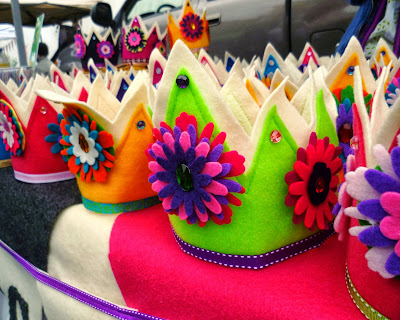 One of my favorite exhibitors was the crown lady. She made crowns from felt, so in this case, easy lies the head that wears the crown. Her price points weren’t exactly the same as at Tiffany, but my friend Bruce would never ever have shelled out for one. An added bonus to the cute crown was watching the crown lady (not her real name) set up Square on her iPhone so she could process my credit card payment. If you haven’t seen someone use it, Square is quite a miracle of modern technology. 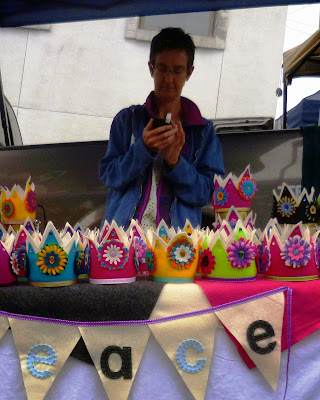 While she was struggling with her technology I asked if she had a crown air freshener for her car. She didn’t know what I was talking about. I tried to explain that they were popular in the African-American community—at least in Cleveland—a few years ago. They came in fragrances like purple and red. I bought one for my nephew for his Geo Metro. I’m sure he had the coolest and most odorific Geo Metro in the Shaker Heights High School parking lot.

Crown in hand, I made my way past the remote for public radio—unfortunately their big foam headed American Kabuki mascot—I’m guessing it’s Virginia Woolf— was doing her own remote at the Volvo dealership that day. The dealership was running a special on converting your car to run on Starbucks Pumpkin Spice Latte instead of gas. 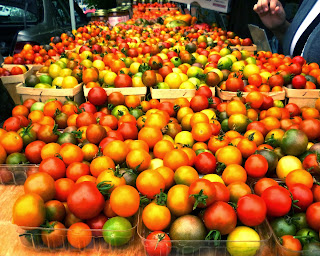 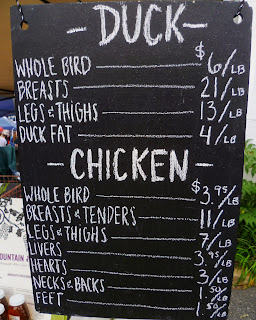 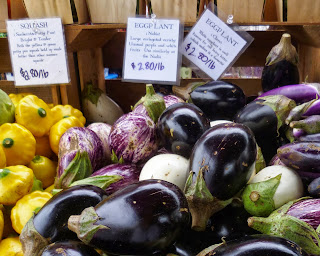 On the other side of the radio station, past some vegetable and poultry sellers, was a charming young woman sampling some sort of baked goods. 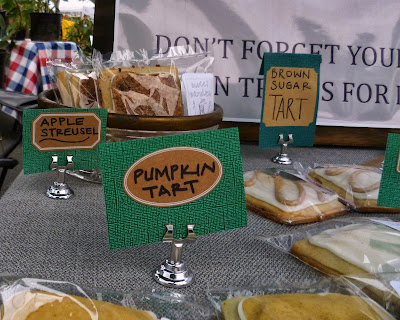 Please try one, she said.

I’ve never had a Pop-Tart.

Say is there a game today? she said, looking at my UVA baseball hat.

This reminded me of the days when you’d only wear fan gear at a sporting event. As in, when I was in college.

Well, not here. They’re playing in Pittsburgh.  I doffed my hat and continued, It’s gay 201. You wear a hat when you can't be bothered to put product in your hair.

She seemed satisfied with my explanation.

In real life, she’s a baker in Crozet, and an accomplished one, judging by my artisanal Pop-Tart sample. 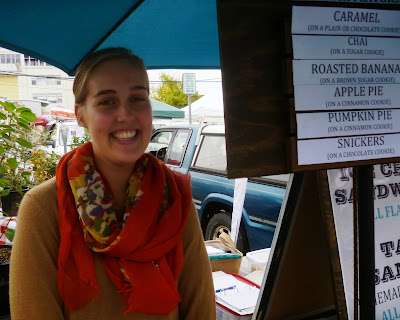 Since I was fairly certain that I’d never have the chance to say that I bought an artisanal Pop-Tart, I said I’d be delighted to buy a cinnamon one. The baker posed for a photo, and with my industrial food made artisanal in hand, I was on my way.

Just a few stands a way, they were selling one of my favorite foods of all time. Chinese dumplings. Now, you might not think that dumplings would not be good as a third course after a free-range conscientious objector hot sausage sandwich and an artisanal Pop-Tart sample. But you would be wrong. 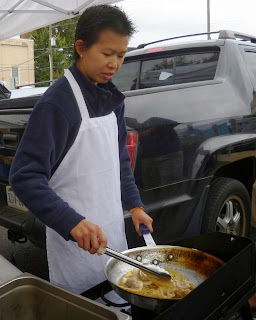 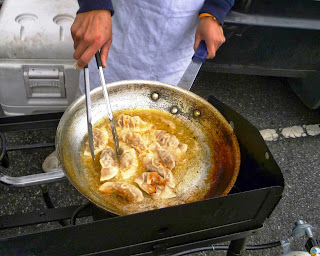 As soon as I placed my order, the dumpling maker pulled some out of her cooler and threw them into the hot frying pan where they turned brown and delicious right before my very eyes. She explained that they’re already steamed so this is just the end of the cooking process, just to make them pretty. 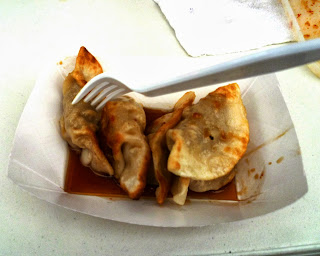 Holy smokes were they good. And, washed down with a hot cup of Shenandoah Joe Coffee, well, it was the best meal I had that day. 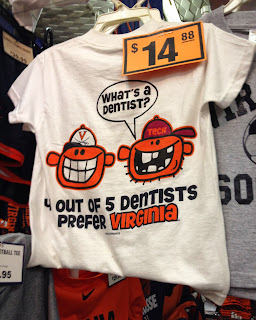 After some antique shopping and attending a lecture, I went to the bookstore to buy some UVA regalia, which, since it's no longer the 1970s, I can wear all the time, even when I have product in my hair. Though they had more blue and orange than you could shake a stick at, nothing really scratched my itch. Fortunately, I had an artisanal Pop-Tart to show for my trip. What more did I need?
Posted by Rick Bryant at 8:10 PM