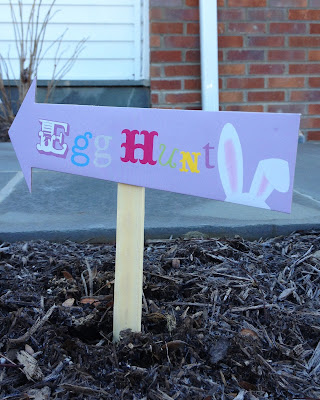 I went to an Easter egg hunt yesterday. I don’t get to do that every day—even in the Easter season invitations to egg-centric fêtes don’t grow on trees. Of course, there’s the public one sponsored by the Centre Region Parks and Recreation—7,000 eggs (seriously!) in Orchard Park. It seems like The Bigs in terms of egg hunts, but as a childless person in State College…well, let’s just say that it’s not really a receptive climate for single, middle-aged men to hang around at public egg hunts, even if, weather permitting, it would be a good place to meet and greet some MILFs and DILFs.

The Easter egg hunt I went to was at my friend Donna’s house. Donna makes the run-of-the-mill Tiger Mom look as if she lies around all day watching television, scarfing down Ho Hos, and reading Harlequin Romances. She’s a successful professional in a field I'm too thick to understand, a mom who makes parenting look easy, and she throws a great party, too. So it’s not really a shock that Donna’s egg hunt is practically camera ready for the editors of Martha Stewart Living. She’s got an adorable kid, a beautiful house, and puts on an unreal spread. If Banana Republic or J. Crew would style the guests there'd be a magazine spread in her future. Yes, Donna’s doing her part, while her guests, well...most of us dress for State College and not the pages of a glossy lifestyle rag. 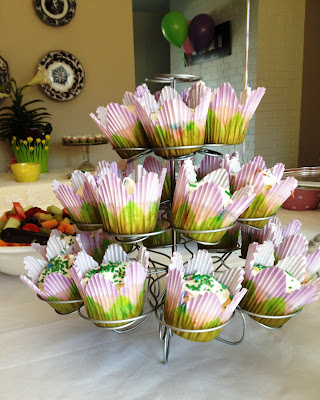 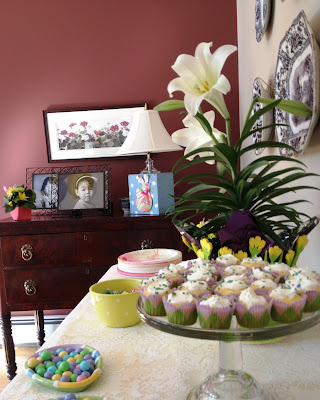 This year Donna asked me to come over to hide the eggs before the guests arrived. When I got there, I shouldn’t have been surprised that Donna and her sidekick Aunt Patti had sealed the driveway, installed geothermal heating in the house and garage, and laid out a brunch spread that not only would appeal to little kids, but also just begged to be devoured by bunch of guys with sweaters tied around their necks as they discussed if they would check luggage or just do carry-on if Ryan Gosling were to run off to Belize with one of them that very afternoon. 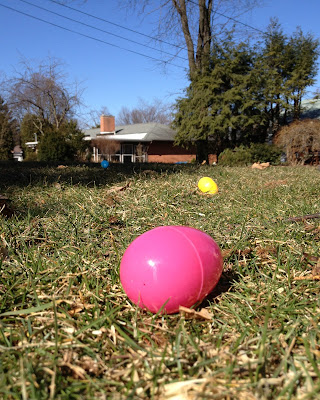 Donna had a large shopping bag filled with colored plastic eggs, each with a prize inside. My job was to hide the eggs in the backyard, remembering that the most of the customers were going to be preschoolers. In other words, hiding eggs in the downspouts or behind the weed killer in the garden shed were bad ideas.

I no sooner had the eggs in place when the first guests arrived. And then the second set, and the third, and so on. Donna had said that she’d invited lots of kids, and she was right. The only one missing, as far as I could tell, was Bruno, my Starbucks chum. He had a better offer with his out of town grandparents.

Most of the guests were prompt so there was an intense burst of “My! How you’ve grown!” “This is the new baby? He’s adorable!”  When that was finished we all went to the backyard patio to wait for the official opening of the egg hunt. Eagle-eyed kids scoped out the yard for low-hanging fruit while the parents chatted each other up. Donna’s daughter and co-host G. made sure that each guest had a sticker, while Donna, using her best teacher voice, put the egg hunters under starter’s orders. 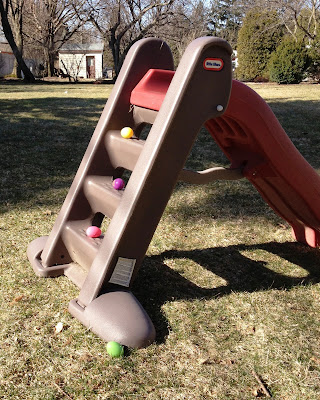 Donna explained that kids had to collect the whole rainbow of smaller eggs and one larger egg which could be any color. While she may have meant it to be a simple modification of last year’s rules where kids were assigned a particular color (“Jimmy, you’re peridot; Suzy, you’re cerulean; Max, you’re that purple that men wear.”) I took this to be silent commentary on the Supreme Court’s recent double header of the Hollingsworth v. Perry and U.S. vs. Windsor. Perhaps that was just a happy coincidence. Perhaps not.

As soon as Donna had explained the rules, the kids raced into the backyard, like thoroughbreds bolting from the starting gates at Churchill Downs. Unlike the three-year-olds at Churchill Downs, lots of the children had parents in their wake, viewing the action through the lens of their iPhones. Au courant parents clearly do not subscribe to my parents' notion that there were no childhood events worth photographing that did not involve a new car, a recently caught fish, or fun with guns, or better yet, all of the above. 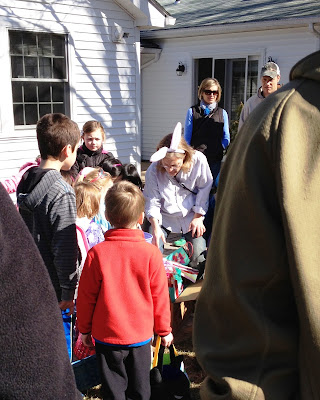 When all the eggs had been collected, Donna had the kids gather around her to check out their haul of eggs. She called out each kid’s name and gave them all personalized gift bags. There wasn’t a Rick, Bill, Bruce, or Chris in the bunch. All the names sounded like Jackson, Maxon, Claxon, and Flaxen to me. I think Piper was a no-show. This robbed me of the chance to see if Piper was a boy or a girl, and if he or she had a brother or sister named Cessna. I suppose I should have been grateful that one of the boys wasn’t named Mr. Darcy. It’s a truth universally acknowledged that someone, someplace, did that to their kid.

The girls’ bags each held a Hermès Kelly bag while the boys got a 72” flat screen TV. OK, maybe not that exact stuff, but the looks on the kids’ faces told me that it was something like that. During my childhood gift bags were a present for the Electrolux. Oh my, times have changed! 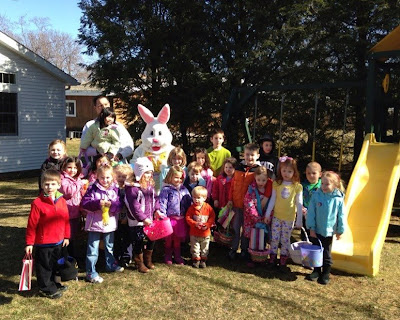 After the bags were passed out, the Easter Bunny just happened to stop by for a photo op. I’ve got to admit, I don’t exactly get the Easter Bunny. He’s a large bunny who wears a vest and hands out colored eggs? Since when have bunnies laid eggs? Oh and he also hands out chocolate bunnies and if you’re Catholic, maybe a chocolate cross on a stick. Got it. How many times has the Easter Bunny seen Harvey? Does he (or is he a she?) have a life partner? If so, are they multiplying like rabbits? How is he (or she) related to Beatrix Potter's bad boy Peter Rabbit? As I’m sure you recall, Peter Rabbit was a snazzy dresser (blue jacket, shoes, his own fashion Tumblr) and an early proponent of a locally-sourced vegetarian diet. He had sensibly shod sisters, Flopsy and Mopsy, and a trashy sister, Cotton-tail, now working for Hef in the Playboy Mansion in L.A. 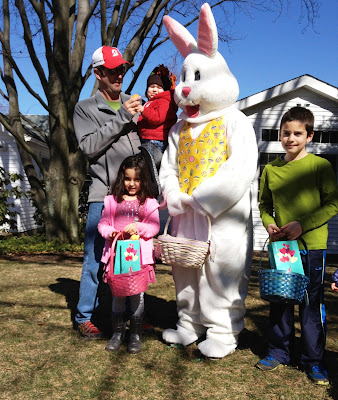 Kids don’t seem to have a problem with the Easter Bunny or his (or her) New Normal relations. Perhaps there is something to running around the backyard looking for eggs. It might not be going to Belize with Ryan Gosling and a carry-on, but as something magical, it's good enough for me.
Posted by Rick Bryant at 8:57 PM